This Father's Day Gift Will Go Down in History 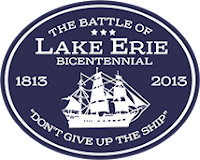 Shrouded in cannon fire, torn sails and a splintered U.S. Brig Lawrence, defeat was imminent for Commodore Oliver Hazard Perry and his crew during the Battle of Lake Erie in 1813.  But somehow, bravery overcame fear and exhumed the last morsel of hope the Americans had left.
With a little help from the shifting northern Ohio winds, Perry eventually rowed to the U.S. Brig Niagara and against all odds turned the tide against the heavily favored British.  Grit, determination and unshakable courage is what Perry and his brave crew of 557 patriots used to propel themselves into victory 200 years ago in the Battle of Lake Erie.
It’s now 2013, centuries later, and it’s your turn.  Defeating the British together in a reenactment of one of the most memorable naval battles in American history could be the finest Father’s Day gift he’ll ever receive.  Whether it’s becoming a crew member on a majestic Tall Ship, representing the land force as a militia member or turning your personal vessel into part of the fleet, dad will approve.
Along with Tall Ships activities, surrounding days will include national speakers, the Ohio State marching band, fireworks, concerts, food, entertainment, arts & crafts, historical activities and an International Freedom Celebration.  And for those who want to focus a little less on history, there’s even more reasons to celebrate.
Nestled on the limestone banks of South Bass Island, the quaint village of Put-in-Bay has become legendary amongst midwesterners for it’s rich history and unique location. Situated only miles from I-90/80 coupled with a short twenty-two minute ride on the Miller Ferry, making your way to this closer-to-home-Caribbean is easy.  And whether it’s you and dad kayaking around the island, parasailing high above the harbor, taking a scenic bike ride or just simply relaxing with a cocktail at a waterfront restaurant, it will be a Father’s Day not easy to forget.
For more information or to reserve a spot in the battle please visit The Battle of Lake Erie Bicentennial.

For more information about top events in Ohio take a look at the Top Events USA selection of the annual main festivals and events in Ohio.