Non-stop Blues in the Delta 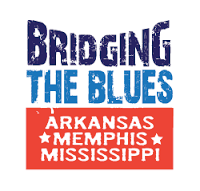 Over a 12-day period running through Monday, October 8, Mississippi, Arkansas, and Memphis, Tennessee, is overflowing with incredible music and blues-related happenings in a landmark event called Bridging the Blues.
“The sights and sounds of the blues have lured devout music fans to the Delta for many years,” said Mississippi Delta Tourism Association President Wesley Smith. “But until the last decade finding one’s way to the holy sites of the music involved actively digging for information about juke joint performances, gravesites or the site of the supposed ‘crossroads.’”
A new effort to help fans find their way through the Delta region of Mississippi, Arkansas and Memphis is Bridging the Blues. The project builds upon the success of Helena, Arkansas’ venerable King Biscuit Blues Festival (October 4-6) in drawing blues fans from across the region, the nation and abroad. Bridging the Blues is anchored by “the Biscuit” on one end, and at the other by the Highway 61 Blues Festival in Leland, which takes place on Saturday, September 29.
The King Biscuit Blues Festival in Helena will feature Bobby Rush, Taj Mahal and Bonnie Raitt topping the respective bills at this year’s festival, which runs from October 4-6.
In Clarksdale, the Rock  & Blues Museum, which houses the massive collection of Dutchman Theo Dasbach, hosts the free 2nd Street Blues Party on October 6 and 7, and October 7, Cat Head Delta Blues and Folk Art hosts its tri-annual Cat Head Mini Blues Festival. The free event always features traditional blues, and this year the lineup will include Big George Brock and Robert “Wolfman” Belfour.
Visit Mississippi Delta for more information.
For more information about top events in Mississippi take a look at the Top Events USA selection of the annual main festivals and events in Mississippi.